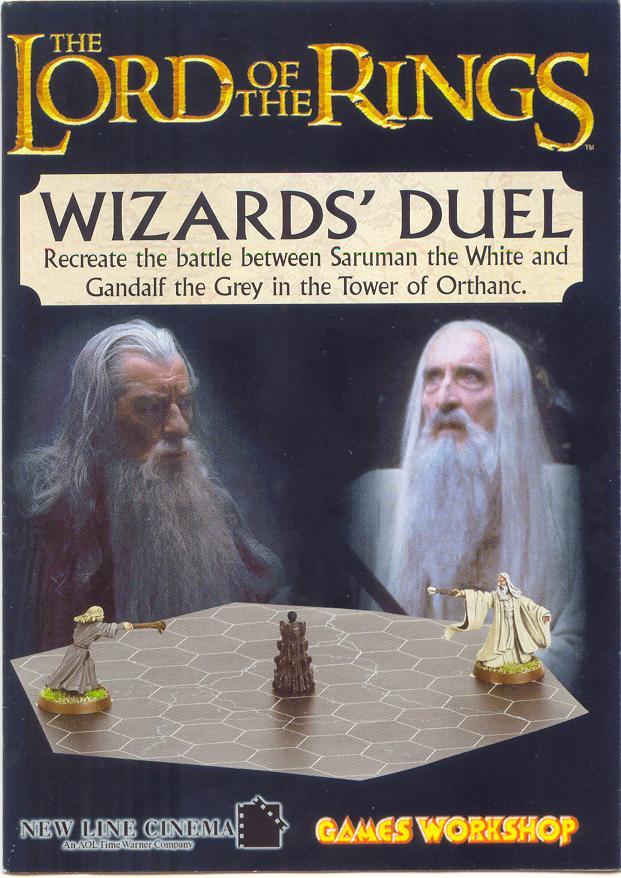 A picture of the front of the box

I don't have all of the details yet, but this is a game that is similar to the 1975 (or so) Wizards game by TSR.  The game is made by the same people that give you the Lord of the Ring Battle Game with miniatures.  However, this is a stand alone game and has it's own set of rules.  The rules are a simplified version of the Wizards game.

The scenario is taken from The Fellowship of the Rings movie in the tower of Orthanc.  This is the wizards' confrontation between Gandolf and Saruman.  I'll go into the rules later, but basically, each wizard chooses from a list of Push and/or Crush spells to attack with, and a defense spell against Push and/or Crush spells.  Each wizard has so many life points.  If a wizard gets pushed up against a wall too many times or crushed with a Crush spell, the eventually, that wizard will get knocked out.  I suppose at that point Gandolf either escapes from the tower changing the story of Lord of the Rings, or he gets sent to the top of Orthanc to think things over. The Spell Charts for Gandolf and Saruman

Game consists of the following:

A hex game board

You need your own set of dice.