War of the Ring (SPI) (wargame)

Before you look at the nice pictures and further information, I would like to present a complete listing of the SPI War of the Ring games and the various versions it came in.

-----SPI War of the Ring -one game, green box, no SPI logo or wording underneath artwork on front of the box

-----SPI War of the Ring -one game, green box, SPI logo on bottom left of the front box and their is wording underneath artwork.

----SPI War of the Ring -one game, white box with bakshi artwork

-----SPI War of the Ring -one game, flat tray version with a cover sheet

-----SPI Middle Earth: War of the Ring trilogy - 3 games, green box Box art of Balrog and Gandalf
covers most of box. Underneath the picture is the logo for SPI and beside it are some sentences. Lettering of the word Middle Earth is in yellow, The Ring Trilogy is in black, and War of the Ring is white, not red like the other version.

----SPI Middle Earth: War of the Ring trilogy - 3 games, green box Box art of Balrog and Gandalf
covers about 50% of the box. Underneath the picture are some sentences and then the SPI logo. Lettering of the
words War of the Ring, Gondor, and Sauron are in red. Word Middle Earth is in white and lettering of The Ring Trilogy is yellow.

If anyone has a version or a foreign edition that I did not put up here, please email me (mike)

Scroll down and enjoy some more information and pictures!

There are various versions of this game.  It is also know as "Games of Middle Earth" (SPI), and can include the subset games "Gondor" and "Sauron" which can also be purcahsed separately. 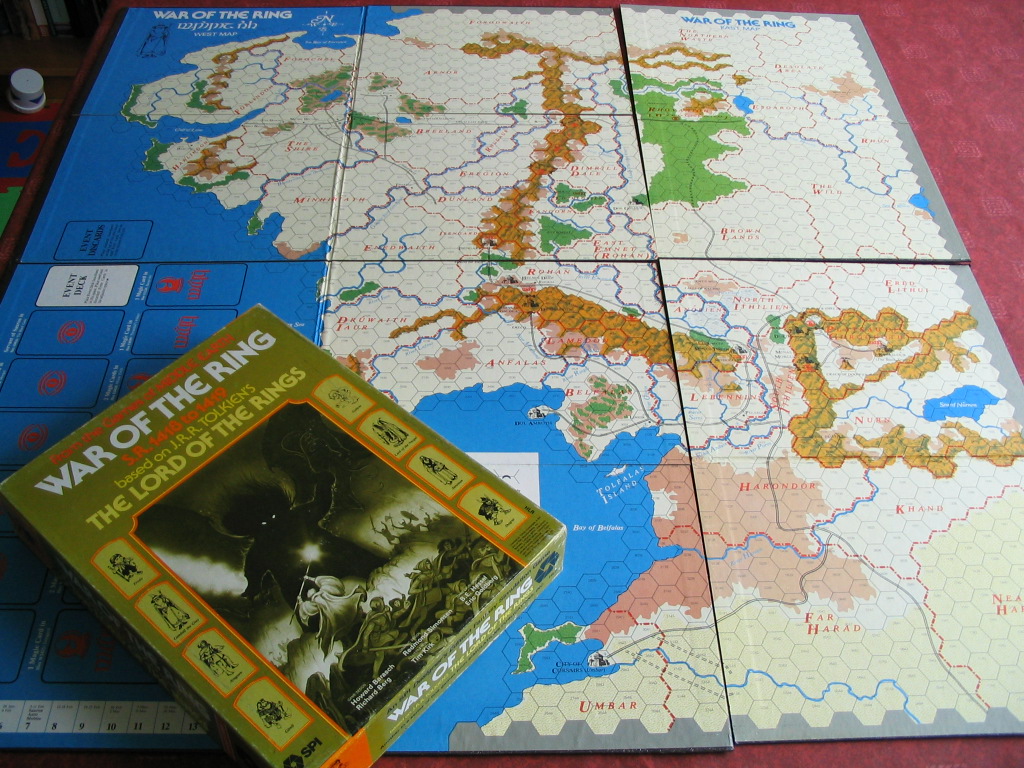 In the Golden Age of wargaming (late 1970s), the big daddy of Lord of the Rings wargames was War of the Ring by SPI.  There are numerous articles in wargaming magazines of its time like Wargamer, Panzerfaust/Campaign Magazine, and Fire & Movement.  There were also variations that people came up with for the game.  I have some variants that people have posted and I will try to include those (when I have it, I will post the author) when I get a chance.  I am not a expert on this game.  While it looks to be an excellent game, I did not get a copy until a couple of years ago.  And due to my busy life, I have not had the time to fully learn the game, let alone finding the time, or the partner to play this big game.  I think this game takes several hours to play.  I could be wrong, but I remember playing Avalon Hills bookcase games like Panzer Leader and that took a whole afternoon to play.  The rule book was similar in size, so that is how I am comparing it.

There are several variations of the packaging of the game, but essentially, they are the same game.  The different titles or boxes are War of the Ring, in multiple styles of packaging which include designer, filo, flat packages in the original goldish color.  There is also the Ralph Bakshi LOTR movie boxed version with pictures of the animated characters from the movie in a white box.  Then there is the Games of Middle Earth.  This box included the War of the Ring game along with separate games Sauron (depicting the Siege of Barad Dur at the end of the Second Age), and Gondor (depicting the Battle of the Pelennor Fields as found in The Return of the King).  These last two games used the basic rules from the main game with their own variations to cover the different situations.  Sauron and Gondor could also be purchased separately.  I dont know how they packaged the rules for these games when separated.  SPI probably just included the necessary rules in one booklet.

Basically, War of the Rings can be played two different ways.  One way it plays as a straight wargame.  The other way involves a deck of special cards that adds quests and magic and other aspects of the book to the game.  Characters from the book are used more in this second version with a whole section on special rules (big rule book for this game, by the way).  The map for the main game is huge.  Depending upon which version you get, the map is either on two separate large sheets, or (I think) mounted with a cardboard back that folds (this one is found in the Designer version, I think  I dont have that version, so I am not completely sure  I also do not have the Ralph Bakshi version, so I have to guess on that one as well).

I have more information on this game and I will post more later.