Top Trumps (card game): Fellowship of the Ring and The Two Towers

Update: Return of the King deck, 2003 UK.  I'll post a picture when I can find one.  The game plays the same as the other two decks with new cards/pictures.

This was, or is, a popular UK card game based on a whole bunch of different subjects.  I haven't looked into what other movies or TV shows they have made, but I think there are a lot.  In this case, one deck last year was based on The Fellowship of the Ring (2002), and this year The Two Towers version came out.  The card game is very simple.  Each card has a character on it like Frodo.  There is a nice picture of him from the movie on it.  There a series of statistics for his Resistance to Magic, Age, Resilience, Ferocity, Magic, and Height.  Each card has a different number.  For instance, Frodo has a Height of 3' 10", or a Ferocity of 30.  Another card, say, an Orc, has a Height, and I am taking a guess as I don't have a picture of the card with me at the moment, of 5' 2" or a Ferocity of 60.  Each card has different numbers for each of the statistics.  The game can be played with any number of players, although I would suspect three or four would be a good number, but two can play.  One person plays a character card and announces which statistic he is playing, like Frodo with a Resistance to the Ring number of 2.5.  Everyone else then plays a card based on the fact that the highest card wins the trump (takes the played cards).  If there is a tie, the cards stay in a pile and the player plays another card with hopefully a high number in one of the catagories, like Saron with an Age of (about) 27,000 years.  You wouldn't want to play a Gandolf card or a Saruman card with Ages of 2505 and 2506 respectively (I'll check on those ages, but that is close).  There are stategies for playing particular cards, but in the end, every card can be beat by someother card.  The person who collects all the cards by the end of the game wins.  Simple.

The pictures on these cards are from the movie (obviously) and look good.  You also get some statistics about the characters that you may not have know.  I am not sure of how accurate they are as I don't remember Prof Tolkien telling to the day how old Aragorn or Gandolf is, but it is close enough.  Truthfully, I thought Aragorn was older as his life span is supposed to be around 200 years being from the race of the Neuminor (did I spell that right? if not, I'll fix it later). 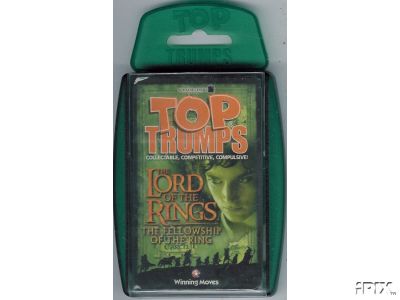 Fellowship of the Ring Version 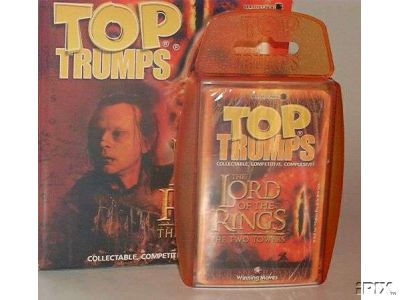 One version of the Two Towers box 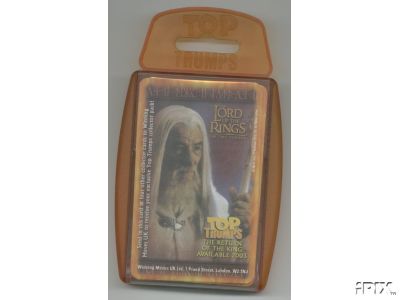 And a different version 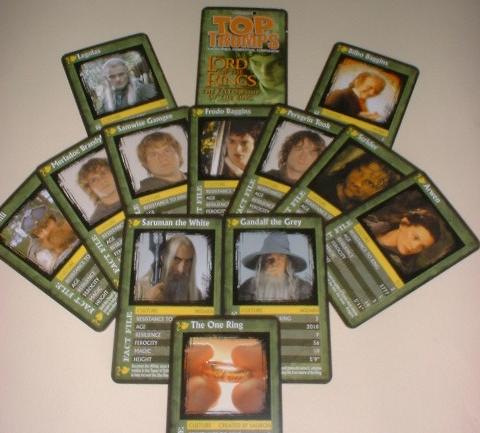 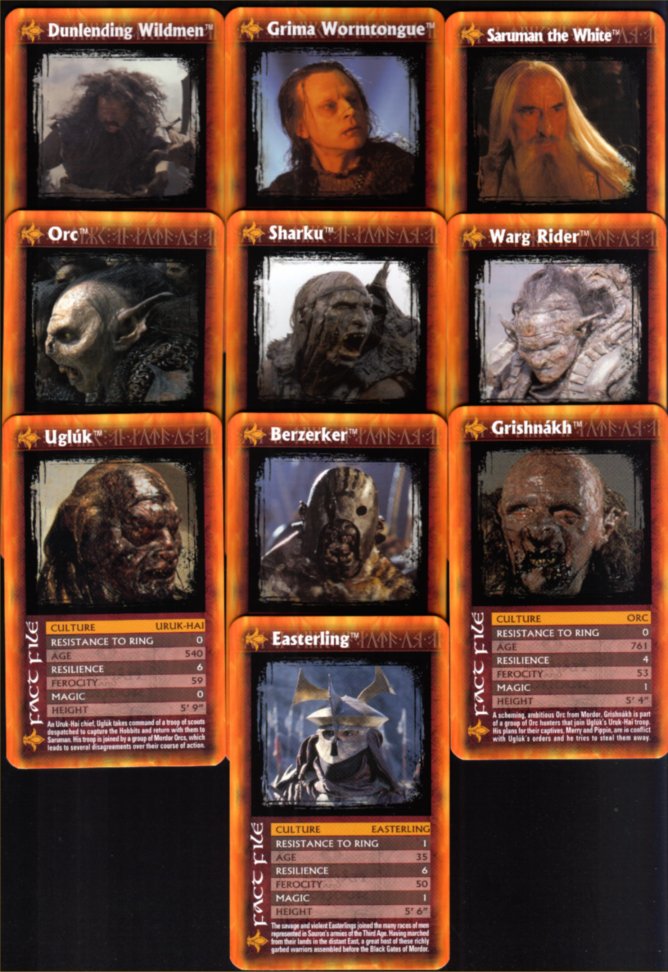 Some of the Evil cards from the TTT deck 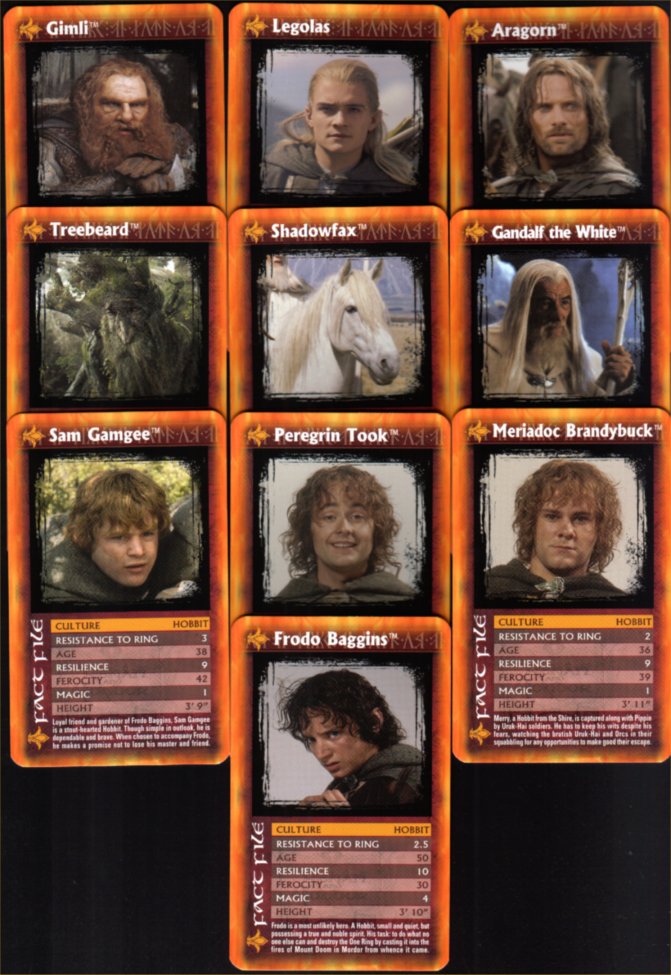 And some of the Good Guys from the TTT deck 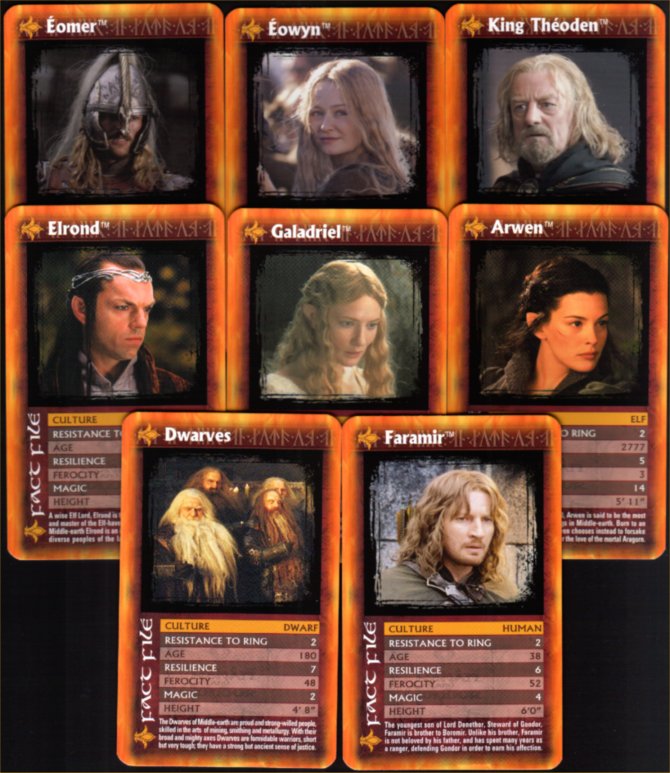 And since everyone like pictures, here is another set of The Good Guys from TTT deck.

1 deck of xx cards in a plastic box. (I still have to check on that)

The color scheme for The Fellowship is Green; The Two Towers is Orange.

Produced in the UK by Winning Moves, 2002

Fellowship of the Ring (now Out of Print)

Return of the King Deck 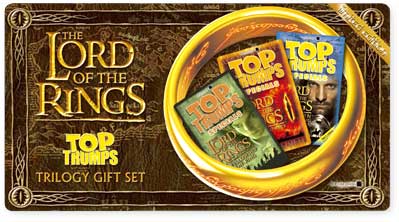 This card game is a very popular game in the UK that procudes decks based on popular TV shows and movies.  It is kind of played like the game of war.  However, instead of one a single card number like Kings and Queens, this game has a list of attributes that can be played against each other based on the character.  You can also get special promotion cards.  Some can be quite rare.

This was one of the lost pages.  I have more info on this game, but for now, here are pictures of the game.

Note that there are decks now for each of the LOTR movies, Fellowship, Two Towers, and Return of the King.

Deck box for the Fellowship of the Ring

The deck of cards showing the different characters from the movie

The other version of the Two Towers Deck 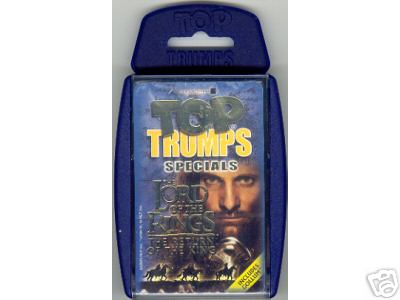 The Return of the King Deck.