Lord of the Rings: Warrior of Middle Earth

This is not a board game, but more like a video game.  But it looks so fun, that I wanted to add it to the list.  You get a sword with a wireless remote (RF remote I think) that moves a sword on the screen, like a video game.  From some of the reviews that I have read, it can get quite tiring, in a fun way, swinging the sword around fighting off evil in Middle Earth.  I wanted to get this game for Christmas, but alas, I did not get it.  I think I will still go out and find it.  Toys R Us on-line carries it for around $45 or $50.  I've seen it upwards of $60 on ebay.  As usual, more later.

Here is a review by Robert Hatchitt (thanks Robert!)

Lord of the Rings

Turn your TV into the Epic Battlefield.

Object of the Game

Complete one stage and then move on to the next stage.  Finish your quest by defeating Sauron himself.

Stage 1  The Ringwraiths at Weathertop

Stage 3  The Mines of Moria

Stage 6  The Paths of the Dead

Stage 7  The of Pelennor Fields

Power bars at the top of the screen keep track of your energy level, the energy level of your

special sword powers, and the energy of certain powerful enemies.    Obviously when your power

bar goes to zero your game is over.  Your power decreases as enemies that you fight hit you for damage.

As you advance through the game, special new sword powers will be given to you.

Training screens will appear to teach you how to call upon the new powers.  The names of the

and Command of the Dead.

This is a fun basic game of hand-eye coordination. The game console plugs into the front

of any TV which has the familiar RCA jacks used by Xbox, Nintendo, etc  The game takes four AA

batteries in the console base.  You synchronize the sword with various swings in front of the

infrared base prior to playing the game.  The booklet with the games demonstrates how to calibrate the

system.  The game starts with the company walking down the road away from the Shire.  You start off

fighting bats and crows.  This basic combat teaches you how to swing at enemies and block their attacks.

At each stage the map shows the progress of the company.  The game follows the movie story line.

Graphics are based on what was seen in the movies (i.e. what an Orc, Cave Troll, or Sauron looks like.).

Graphics and movement are basic at best.  Do not expect Xbox/Gamecube level of visually graphic beauty.

Think more along the lines of Nintendo 64 graphics capability.  My family and I have had the game a little

over a month and we have not passed the Moria stage as of yet.  My wife, children, and I continue to be

pulverized to mush by the Cave Troll.  The game itself can become physically taxing because of the

wrist and arm movement needed to continually swing the sword.  My wife the next day, after her first

sojourn into Middle Earth, could not write for any length of time because her sword arm would cramp up.

What a weenie!  The game is rated for ages 8+, but my two children being 7 years old and 4 years old love it.

They also picked up the game rather fast and do quite well.    I think overall it is a good basic game.

Anyone having fun playing Atari retro or old Nintendo would be pleased.  Anyone wanting the

latest, realistic, blazing graphics will be disappointed.   Watching your kids take up the sword to protect

Middle Earth is a must for any Tolkien fan. 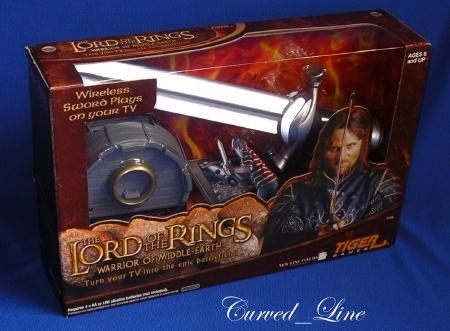 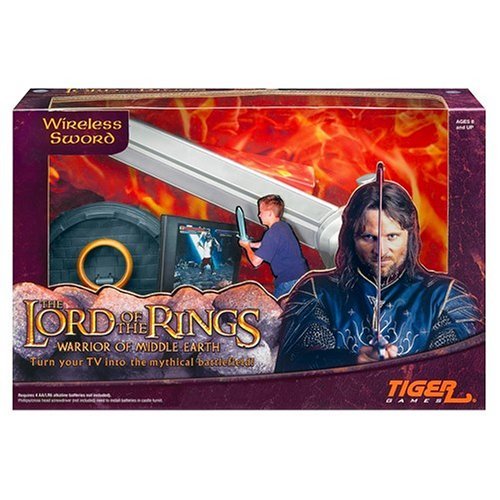