Published by Telepizza, available in both Spain and Portugal, 2003 (I'll let you know if the pizza is any good)

Here is a report from Miguel from Portugal on a game available in Spain and Portugal...

Just to say that in fact there is a game from N.L.Cinema . I have it and I don´t seem to see it in your list . This game was a limited offer by Telepizza , both here in Portugal and also in Spain in the late months of 2003 . The box has Aragorn on horseback and with a sword . Above that image is the One Ring . It also has a map of MidlleEarth . The title comes in Spanish and reads : "El Señor de los Anillos . El retorno del Rey ." (The lord of the rings . The return of the King) . In both superior corners (right and left) of the cover there's also the following : "El juego del anillo" , in Spanish and "O jogo do anel" , in Portuguese , meaning The game of the ring . Instructions come in both Portuguese and Spanish . The game is very simple and with cardboard components (after all it was free) . The back of the game is publicity of Spanish Telepizza . Both in front and back of the game the following phrase appears : "New Line Cinema , an AOL Time Warner Company . " In the back comes also " MMIII New Line Productions" , so it´s a game from 2003.

And a second email, Miguel said...

And here is a picture (flyer) that Miguel sent to me. 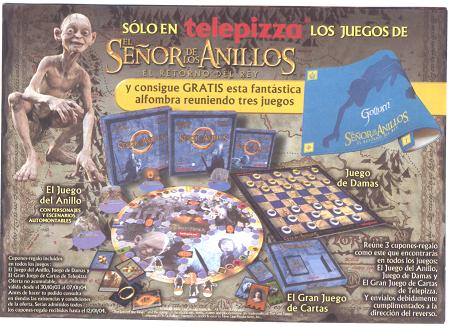 Instructions are in Spanish and Portuguese.