Due to time, and for the fact that I have this game but I have not played it yet, I will offer for now a Rules Summary from an English translation of the game.  This is a German game and is no longer published and is hard to find, but it is possible as I found it recently.  On to the summary:

All the pawns cannot use any routes during their movement other than the routes over land and water traced on the board. Pawns are not allowed to leave the displayed paths. The clear pawns can, at any intersection or junction, go in whichever direction they want. Even at the junctions marked with three black arrows, they may turn in the opposite direction indicated by the arrows.  All along the various roads, there are small circle spaces in grey and black.

The players assemble the board together, shuffle the cards and place the pawns on their starting spaces. They decide where to place the hexagonal counters, and set off on a rather long journey through Middle Earth.

Each player moves his coloured pawns (each one up to the next free space). The clear pawns have the right to jump over other clear pawns and change direction as they wish at each crossing or junction (even at those marked with black arrows). They can also temporarily use certain galleries built by the Dwarves (see the card). The Hobbit carrying the Ring (see the card) is only the pawn capable of jumping over black pawns (Orcs and Gollum).

If a clear pawn is placed on a site of  arcane power (marked with a white rectangle), he turns over the top card of the draw pile. This is valid for all players and dictates three things: (1) direction in which the black pawns will henceforth move, (2) the Ringbearer, (3) changes to the paths available (new galleries of the Dwarves or great storm).

If in travelling, a Ringwraith (large black pawn) arrives on a black starting space (ringed arrows), it is then necessary to turn the tile (a quarter turn to the right) with the help of the mountain.

If during its movement, a black pawn attacks a clear pawn, it is the size of the two adversaries which determines the victor, or the colour of the space on which they meet. If the black pawn is beaten, it turns about. It must then journey to the next black space in the new direction (while following the arrows placed at the junctions). It can still attack other clear pawns. If a Ringwraith beats the Ringbearer, the game is lost for all.

The Hobbit which first reaches Mount Doom while being in possession of the Ring, is the winner. A Hobbit does not have the right to pass through the secret path guarded by the spider until it has got rid of all its hexagonal counters. To do this, it is necessary that three clear pawns (of which two are of the necessary colour) manage to reach these counters.

12 Octagons and 11 square tiles being used to form the gameboard. 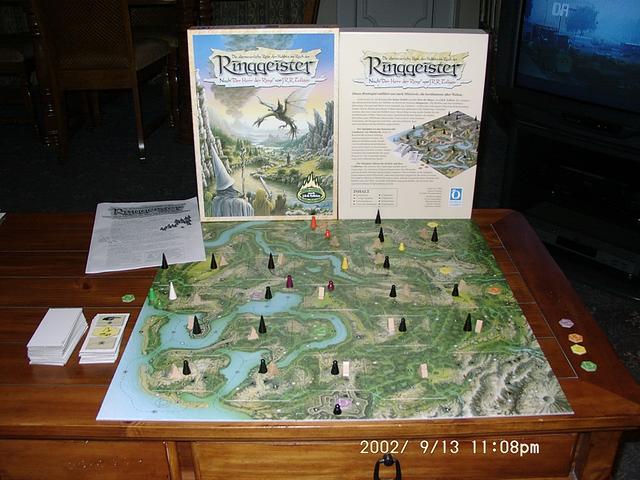 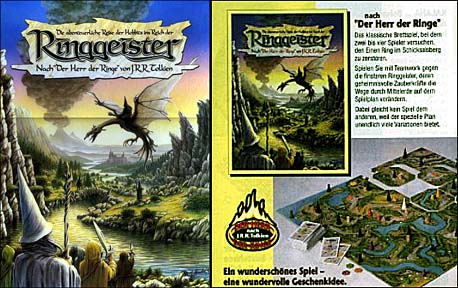