Publisher: Unknown at the time - Spain

I got word of the first game from 2005.  It comes from Spain (thanks Gioacchino).  It looks to be the traditional game of Parchisi or Parcheesi (in Spain it looks to be spelled/pronounced Parchis).  I only have this one picture at the moment, but it shows what it is.  I was given an english translation of the game.  If I can find a little more about this game, I will post it. 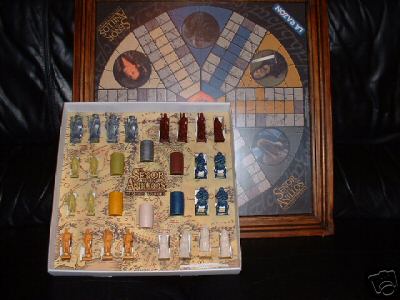 I think Gioacchino wanted me to include the rules so here they are:

This a race game. It´s very similar to Ludo, introduced in England in 1896. Parcheesi ans Ludo are directly
inherited from indian game Parchisi. The Parchisi, in India, is played on a wool crossed board extended on
the floor or on a table. There are, in Agra and Allahabad palaces, big Parchisi boards with red and white
marbled squares where the emperor used to play, being the living pieces 16 concubines from his harem.

Parcheesi is played on crossed board with 68 squares; 16 of them, the secure squares, are specially
marked. Four groups of pieces are used, each of them in a different colour and with four pieces.

Each player has his own colour, using one of the groups of pieces.

There are also four zones out of the route, corresponding with the four groups, where players store
the pieces that aren´t incorporated into the game.

The pieces move forward along the 68 squares of the route according to the punctuation
shown by the dice that the players have to roll every turn.

This is the look of the board at the start of the game:

Parcheesi has many rules that take different interpretations, so there are lots of variants.
We opt and for one of them, the variant here described and that you can play.

The winner is the player who introduces all the own pieces in their respective final square,
according to the following rules.

How the game goes on

Before starting, one of the pieces of each colour is placed in the correponding starting
position; the remaining pieces are placed in their corresponding coloured home.

Each player roll once the dice; the player who gets de highest number starts the game,
and turns continue anticlockwise.

In the version here offered the game is always started by the player that uses the yellow
coloured pieces.

Pieces are incorporated to the route only when the punctuation got with the dice is five.
If possible, the incorporation is obliged, and the piece is placed on the same coloured
starting secure square.

Once in the route pieces are advanced, in ascending numbering direction (counterclockwise),
the number of squares marked by the dice. When several pieces can be moved, the player have to
choose one of them.

Exceptionally, when the value of the dice is 6 the piece must be advanced 7 squares if none of
the pieces of the same colour stay at home

Players repeat their turn, after doing the correspondig move, whenever the puntuation got
with the dice is 6; the repetition is possible up to twice (the dice may be rolled three times).

Barriers are made by placing a piece in any square occupied by another piece of the same colour.

Pieces cannot advance through the barriers; one move is not possible if the piece cannot
complete the advance of all the squares marked by the dice before colliding with a barrier.

When the moved piece finishes the advance in a square occupied by another piece of
different colour, the moved piece eats the other, and the player that makes the capture
moves again, advancing 20 squares any of his pieces. The eaten piece goes back to home,
and only will return to the route with one 5.

Captures are not possible in secure squares; when advancing to an occupied secure square,
the piece stays together with the piece that previously was there; anyway, no more than two
pieces may occupy the same square.

The move is not possible if the advance has to finish in a secure square occupied by two pieces.

Although the starting squares of every colour are like ordinary secure squares, when two pieces
stays there one of them may be eaten with one 5 by one piece that stays at home;
if one of the pieces is of the same colour, the other piece is eaten; if both are of different
colour, the one that arrived later to the square is eaten.

When one player rolls the dice three times because the first and the second time has got 6,
if newly gets another 6 the last piece moved results eaten and the turn finishes; in this case,
nobody counts 20 squares. That piece should not be eaten if it´s already into the finishing corridor.

When one piece rounds all the track and arrives to the low zone of the last corridor for its
own colour, starts the ascent by those squares.

The entry into the finishing square must be made after advancing the exact number of squares
marked by the dice; if the remaining squares ar less than that number, the move cannot be done.

When one piece reaches the finishing square the same player have to make a move advancing
10 squares with any of his pieces.

Each corridor is only opened to the pieces of the same colour.

When one player rolls the third six, if the piece moved after the second six is already in the
final corridor it doesn´t results eaten, but the turn finishes without moving.

The game finishes when some of the players introduce all the own pieces in their respective
finishing square.

Parcheesi may also be played between two players.

Each of them will play with two colours (8 pieces), placed in opposite corners of the board
(red and yellow, or blue and green).

In practice, this variant increases the strategic possibilities and reduces the importance of choice.

Although the rules are the same in both variants, some explanations are needed:

Turns are for players, not for colurs, so they may choose any of the eight own pieces
for each move, even in the same turn.

The rule that says that pieces advance 7 squares when the dice shows one 6 and there
aren´t pieces at home is applied by colours, not by players; so the number of squares
to advance with one piece doesn´t depend on the situation of the pieces of the other colour
owned by the same player.

Different coloured pieces always can eat between them, even though both correspond to
the same player, and anyway the 20 square move may be made with any of the pieces of the
player who makes the capture.

Variants according to the size of the board

Although the original game is played on the described board, there are some variants played
on different sized boards that make possible to take part in the game a variable amout players
according to the number of colours in the board.

Ludoteka.com offers the option to play on boards with 2, 3, 5 and 6 colours. In the last case,
the six colours may be distributed between 2, 3 or 6 players.

The explained rules are applied for all the variants. Obviously, the length of the games and
the optimum strategies vary depending on the selected variant.