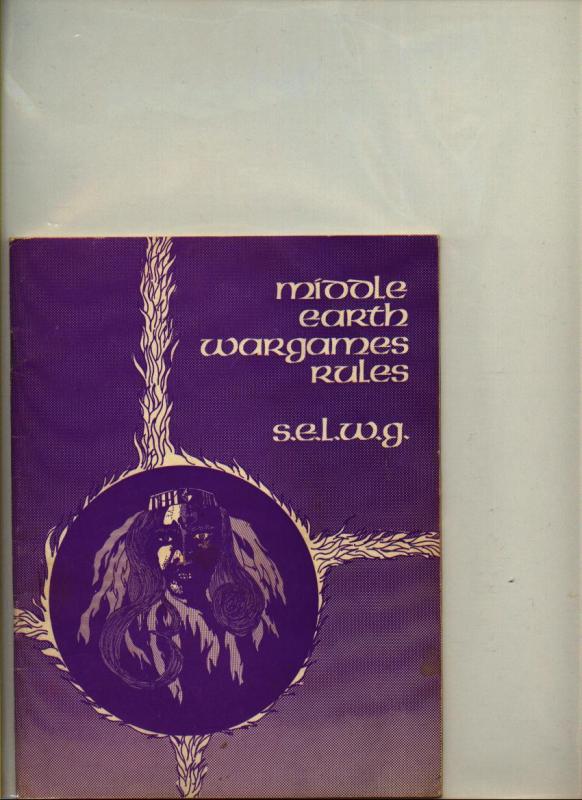 This is an early game which attempts to describe miniature battles at the 3rd age in Middle Earth. The game was created by the South Essex League of WarGamers (SELWG) and published by Decalset in 1976. Doing some looking on the old boardgame newsgroups, a person back in 1999 gave a review of this game. Here is an excerpt and below is the link:

"There are two systems more than I want to comment. First they are written rules  specifically to simulate battles in the Third Age of the Middle Earth, written by S. Johnson, K. White, G. Highley and K. Minear and published by DECALSET in 1976 when not yet there were game of rol of the Middle Earth nor Mithril miniatures. It is an excellent game but a little ambiguous in the description of troops, although it introduces very interesting elements as ready complete of sorceries for Gandalf and Lord of Morgul and a new concept in the regulations of fantastic battles: " the fight of wills ". He is so old (20 years) that does not take advantage of everything what until today
it has been written on the Middle Earth. I do not know if there are new
editings, since I have obtained it through Joan Parés, of Central de Jocs,
and with the printing of being " a peculiarity ".

Here is the link to the original topic: