Okay, I have more information on this game.  First, I love playing the original Risk, so I was very happy that there is a LOTR version.  Like the first LOTR Risk version, this game can be played with the regular Risk rules.  The difference between this game and the original LOTR Risk game is the size of the board.  The original version only covered the upper 2/3 of Middle Earth stopping at the southern board of Rohan.  Essentially covering The Fellowship and Two Towers stories.  This Trilogy version covers all of Middle earth by adding Gondor, Mordor and the Southlands.  The playing pieces are similar in color, but are slighly different.  The yellow pieces are more gold, and the red pieces are a dull red instead of a bright red.  I am not sure why of the color change other than keeping the two games separate.  If you have the original game, but don't want to buy this game, there is some hope.  You can't find it in the US, but there is an add-on game board called Risk Expansion: Mordor and Gondor.  It can be found in the UK for a pretty penny, but it is still available.  It is probably cheaper to buy the Trilogy Edition.  The game is the same.  The advantage of the Mordor and Gondor game is that there is a mini game included that is not included with this Trilogy Edition.  I have a picture of the Trilogy board down below.

On with the game.  I have not yet played the Expanded Rules which allows for Quests and Adventure Cards and a chance to destroy, or not to destoy, the Ring.  I am playing this game with one of my kids with the regular rules.  As soon as we play the Expanded Rules, I'll add more on that later.

I don't want to go into the rules at this time as it is played just like the standard game of Risk, just with new territories, and therefore new strategies.  I have played this game with a friend of mine who has played Risk a lot more than me and knows the best territories to occupy.  But with this new game layout, we were both in new territory, so to speak, and made for a more even game.  I beat him, by the way.  Barely.

Strategy:  The two areas that get the most points for more armies are Arnor and Gondor.  I have found that if you can quickly take over Mordor, Gondor, and Haradwith down south, there are only a couple of areas that you can attack at.  Mordor and Haradwith both give you 2 armies each, Gondor will give you 7.  That is a total of 11 armies if you can hold the whole southern section.  On the other side of the map, Arnor (also worth 7 armies) has multiple ways to attack it (N, E, S, and W).  I don't know if this is really makes for a lopsided game because if you can hold the north, you get a lot more points than the south.  Also, I think once I start playing the Expanded Rules, this will allow the use of attacks from the sea allowing more attacks to the territories in the south, at least along the coast.

I will have to play this game some more to see if there are any problems.  I know probably other people have played this game, so I will have to check on their strategies.  More later.  DW

So far I don't have much on this other than I guess there were problems with the rules for the other edition that Hasbro put out.  So they modified the rules, expanded the board, and added a bunch of new pieces.  I am listing this one separately from the previous editions due to the significant number of changes to the game.  I just saw this new version posted on ebay at the beginning of Nov.  I knew a new version was coming, I just didn't know when.  I checked the Hasbro/Parker Bros site, but I don't see any info on this new version yet.  I will keep you posted.

I have found two different box covers.  Last time this happened, one was from the US, the other from the UK.  I am not sure yet on this one.  I say this because the last US edition was gold toned and the UK edition was blue toned (compare below). 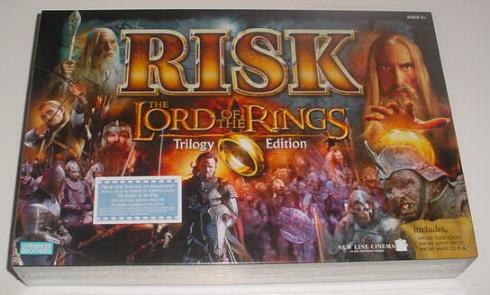 Probably the US box (this is the one I got). 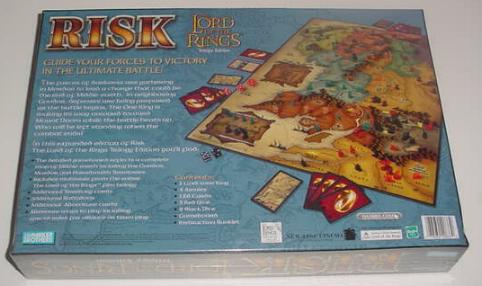 The back of the same box. 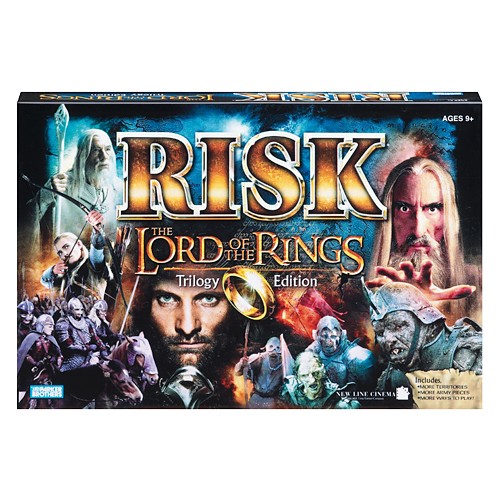 The "other" box.  Might be the UK edition, or a prototype box. 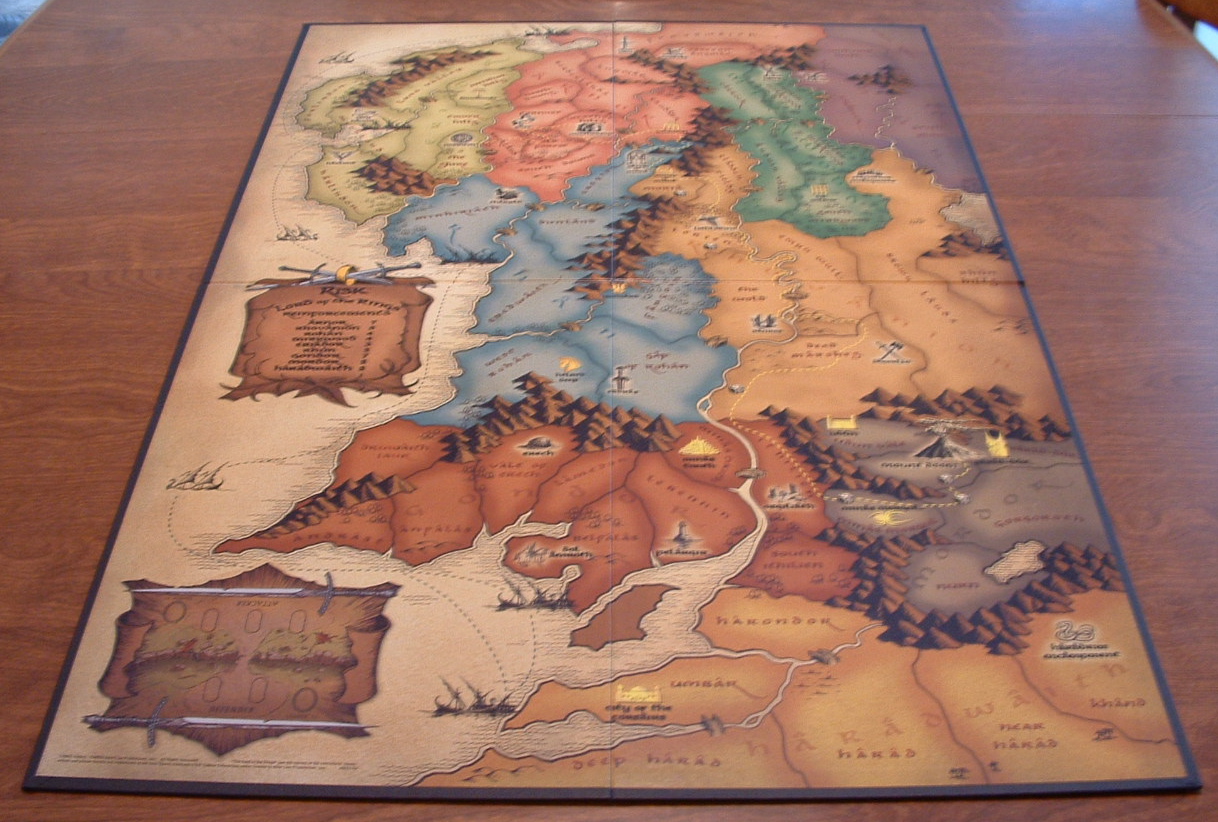 The Trilogy Board with the new Territores of Mordor, Gondor, and Haradwaith.  Once all three territores are occupied, there are only 4 territories to attack, unless you play the expanded version and can attack from the sea.