Lord of the Rings - Risk (boardgame) 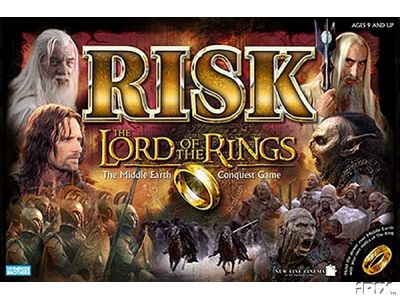 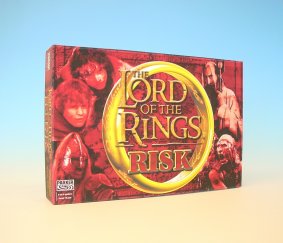 This is the classic game of Risk, but with new variations.  It can be played with new rules, but it can also be played with standard Risk rules.  This is supposed to be the first of two games.  This version only includes the territories covered in the first two parts of the trilogy and does not included Gondor and Mordor.  From what I have heard, the next version will cover the southern area of Gondor and Mordor and can be played separately or together with this first version.

The object of the game is; to score as many points possible before the Fellowship, with the One Ring, leaves Middle Earth (to be continued with the next version).  You score points for each Territory you occupy and each Region you control, as well as for cards played and Strongholds held.  Battles are fought between opposing armies in adjacent Territories.  The numbers of army units determine the number of dice to be rolled (max attacking die is three, max defending die is two).  Both sides roll.  Dice are matched.  Highest to highest, next highest to next highest.  Highest dice for each match wins, defender wins a tie.  (Example: if the attacker [red] rolls a 6, 3,2 and the defender [black] rolls two 5s, the red 6 beats the black 5 and the defender loses one battalion; the next dice the black 5 beats the red 3 and the attacker loses a battalion; etc).

What is different from Standard Risk?

·       All Territories are places from Middle Earth;

·       The characters have been specially adapted for this edition and represent the Elven Archers, the Orcs, the Riders of Rohan, the Dark Riders, the mighty Eagles and Cavetrolls;

·       You play either a Good or an Evil force in the battle you control;

·       You have additional Leader movers to aid you in your quest;

·       When defending Strongholds you control, your power is increased;

·       Visit the ancient Sites of Power scattered around Middle Earth with your Leader and complete Missions for rewards;

·       The One Ring moves with the Fellowship from Hobbiton, southeastward through Middle Earth  but beware, time runs out in the game when the One Ring leaves the land!

Cards: Contain secret missions for your Leader and help you gain rewards.

Event Cards: Various things can happen to you on your journey, and these cards may help or hinder your quest with events that occur when you play them.

Power Cards: The balance of power can shift throughout the game.  Power cards can make a big difference to your strategy and luck.

The first four steps are the same as in Risk with the exception that Leaders can affect the strength of the attacker/defender during battle.  Declaring missions during Combat and effects of Strongholds.  And during Drawing Card phase, you draw a Territory card (if you conquer a territory) and/or you can draw an Adventure Card.  Mission Cards are kept secret until complete.  Event cards are played immediately but beware, they can be bad or good.  Power Cards are used during the Combat phase.

LOTR Risk "Battalions" and "The One Ring" 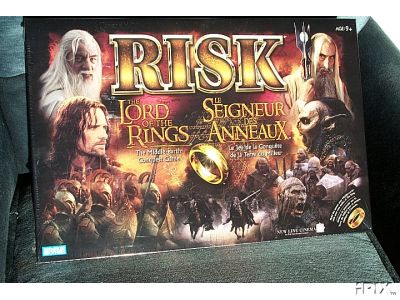 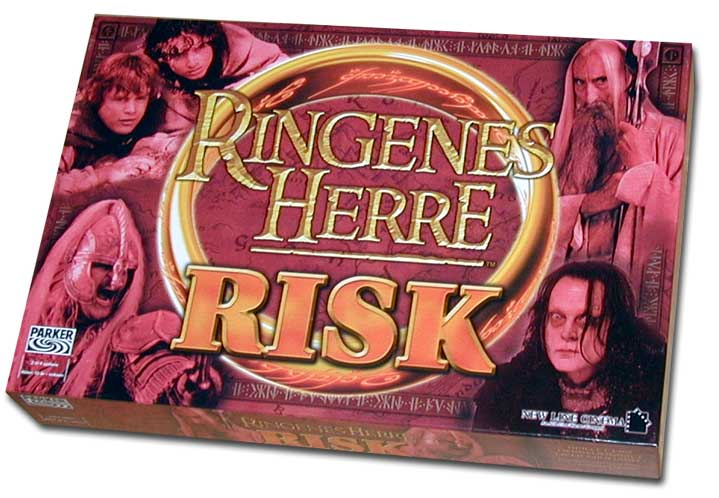 This is one of the pages that I lost, so I only have basic information for now.

This is a great game based on the original game of Risk.  The map is of Middle Earth, of course.  But this is the first edition and includes the map for only the Fellowship of the Ring and Two Towers areas.  So the southern boarders stop at Rohan.  Gondor and Mordor are not included in this game.  You either have to get the Mordor and Gondor Risk Expansion set that is available only in the UK and Europe (not here in the US).  Or there is a new Trilogy Edition.  If you are looking to buy this game, I highly recommend getting the Trilogy Edition, it is a much fuller game.

This game has two modes of play.  The original Risk rules, played just like Risk.  And there is the Expanded Rules that allow for movement of the Fellowship to try and destroy the Ring.  Adventure cards are included for this second set of rules.

Here are some pictures.  The Red box version is found in the UK, and various countries in Europe like France.

The original edition based on the Fellowship and Two Towers movies.  This is the US version.

Here is the UK version

Here is the layout of the original board.  The lower right edge stops at Rohan (the blue territories) 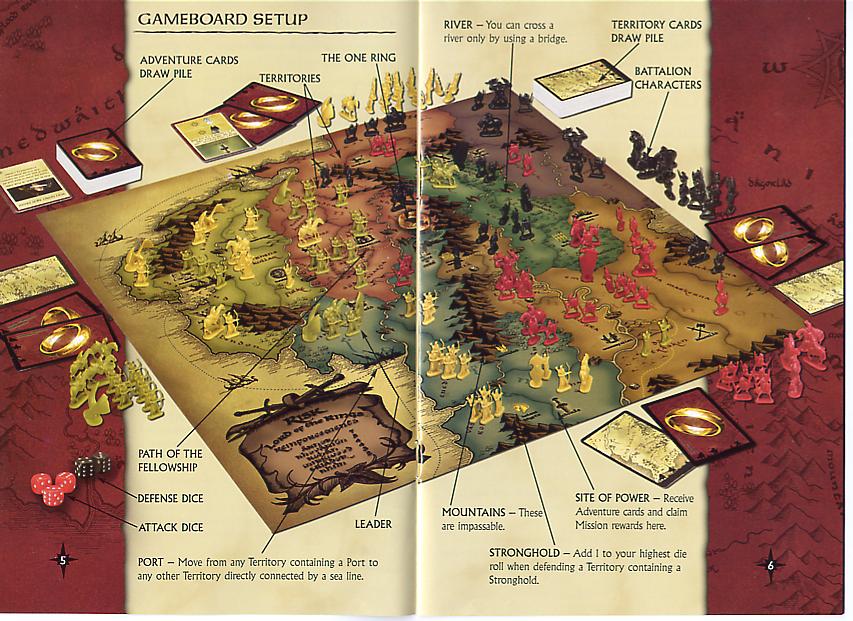 Here is a picture of the map found in the rules book.

The Dutch (I think) version.