Dragons  An Adventure in Middle Earth

This is another rare game.  The only two versions Mike and I have come across are the two different versions we both have.  The game play is the same, but the packaging is different.  This is almost a homemade game.  The box that the game comes in looks like a thin white gift box that comes from Macys or Nordstroms that would hold a pair of gloves.  Then it looks like Lee must have just glued on a cover paper to the box.  The rest of the contents are printed on great big sheets of paper of various sizes with the instructions printed on both sides of the board sheet.  But dont let the homemade feel fool you, the game is actually a unique and interesting game.  It is a type of Dungeons and Dragons board game.  Before I explain the game play, let me describe the playing pieces.  The board is a large square grid format.  The dungeon is actually made up of a series of square cards that are dealt and drawn during that game.  The dungeon cards have various passage ways printed with corridors, doors, and rooms on the face.  The characters are small square cardboard cutouts (like the old wargames) that has a arrow indication showing which end is facing forward.  It also shows movement, strength factors and unit type (Hobbit, Dwarf, Elf, Man, and Wizard).  There are also other units like Magic Swords (+1, +2, etc), Treasure Markers, Magic Rings, and other items.

To start with, I will use what is printed in the rules to help explain game play  since I have not yet played this game:

Dragons is a two player game in which each player leads an expedition composed of men, hobbit, dwarves, elves, and wizards, in search of treasure in an ancient and unexplored dungeon: full of goblins, trolls, and other generally nasty things similar to those found in the Mines of Moria.  I say unexplored, because the dungeon changes from game to game, indeed from turn to turn, with each player building the dungeon as he goes along.  Each player starts the game by selecting or hiring his playing pieces for the expedition which will be called characters.  There are five types of characters available for hire; wizards, men, dwarves, elves, and hobbits.  These characters are represented by small white pieces of cardboard bearing the initials, (W) for wizard, (M) for men, (D) for dwarf, (E) for elf, and (H) for hobbit.  Each character type varies in strength (which is important in combat) and the amount of gold required to hire him, for example, a hobbit has only half a strength of one and cost 100 gold pieces to hire, while a dwarf and elf are relative strength of two and cost 200 gold pieces, a man with a strength of three cost 300 gold pieces, and a wizard being the strongest with his strength points of five cost 500 gold pieces to hire.

Each player starts with 500 gold pieces and has to decide on which characters to hire.  Once a player has acquired more gold, he may hire more characters.  Once the characters are hired, they are placed on the board.  Each player then places one of the dungeon passageway cards on the adjacent square creating a passageway for the characters to move down.  The sequence of play is a first player goes first placing down a dungeon card, and then moving his characters (and facing them).  The second player then does the same.  Followed by a Monster movement (controlled by the opposing players depending upon where the monsters are).  Combat is determined by the strength factor but is altered due to the facing.  For example, if attacked from the side the attacker would get two Advantage Points.  A roll of the dice determines the outcome with the Advantage Points adding or subtracting from the total.  There are a lot more rules determining spells, magic items, monster charts, magic rings, healing, and special rooms that are similar to Dungeons and Dragons.

There are three different levels that can be played.  There are also additional Miscellaneous Rules that deal with special rules for dragons, brick walls, and other special circumstances.  Dragons can be played with different sets of victory conditions The first is called In Search of Gold.  In this system, the first player to get out of the dungeon with 2000 or more gold pieces wins.  The second set of victory conditions is called The One Great Ring.  The first player to have a character leave the board through his opponents starting edge with the Ring of Soblib, wins.  The third version of Dragon is called The Lonely Mountain.  In this game, the first player to kill Smaug the Dragon wins.

Large Game board made of heavy newspaper type paper printed on both sides (rules are printed on this sheet as well as all three dungeon layouts); Size (22 x 35)

(According to a stapled addendum added to the game sheet it states: The playing pieces are no longer blue or on peal and stick paper, however, you may wish to glue them to thicker cardboard before you cut them out.)

This means there are at least two versions of this game.  Mike and I have the same internal components, so we dont have indications of what other versions look like. 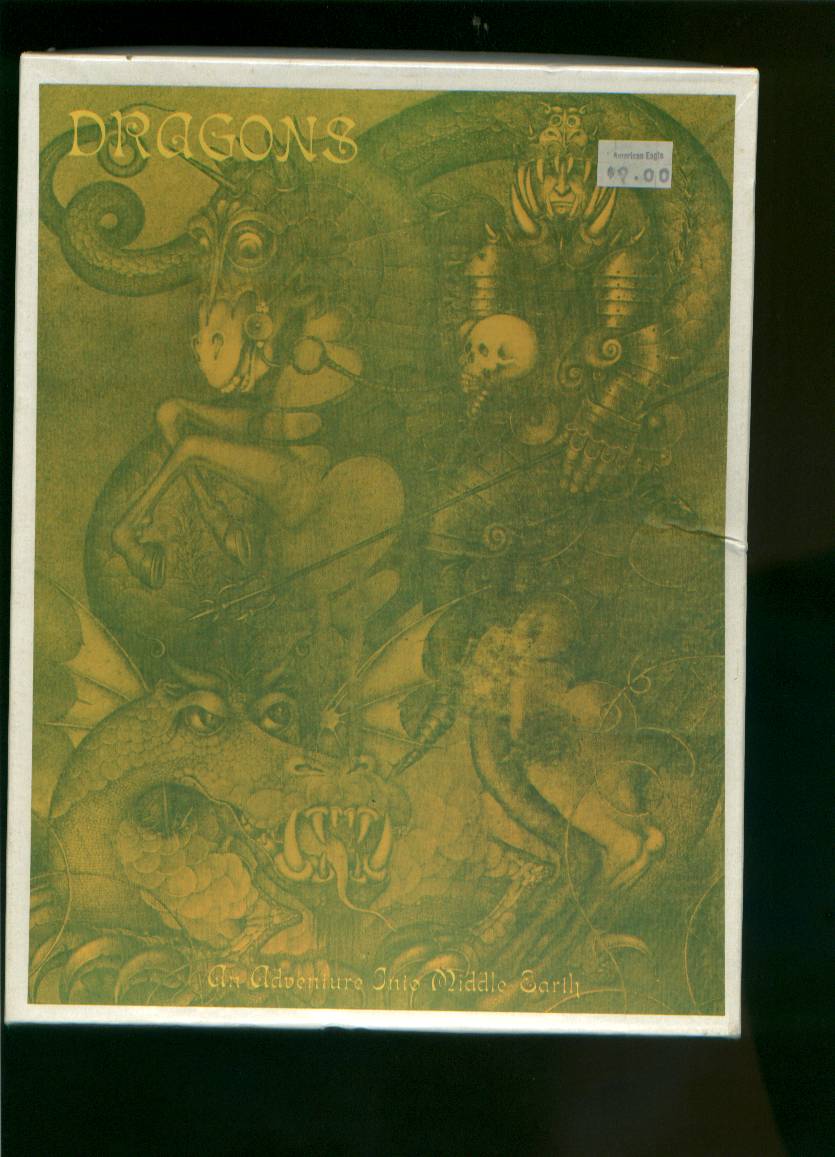 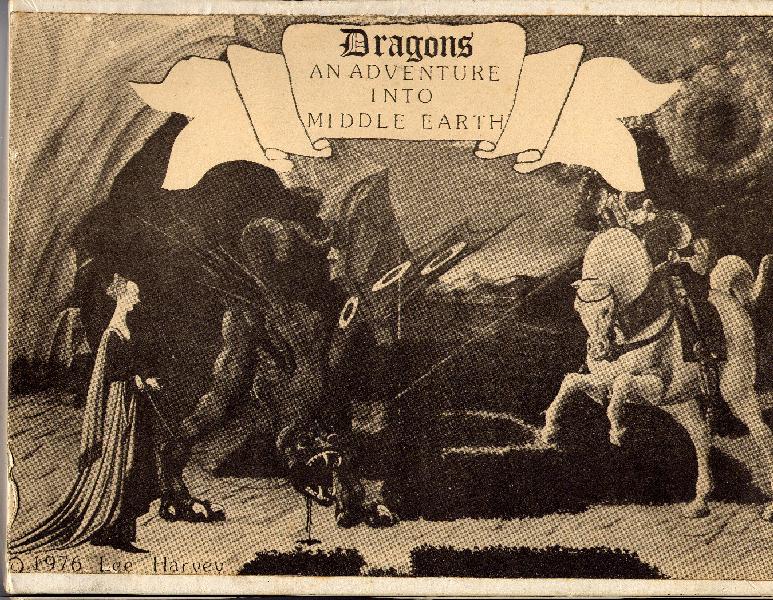 Dragons - Some of the Playing Units 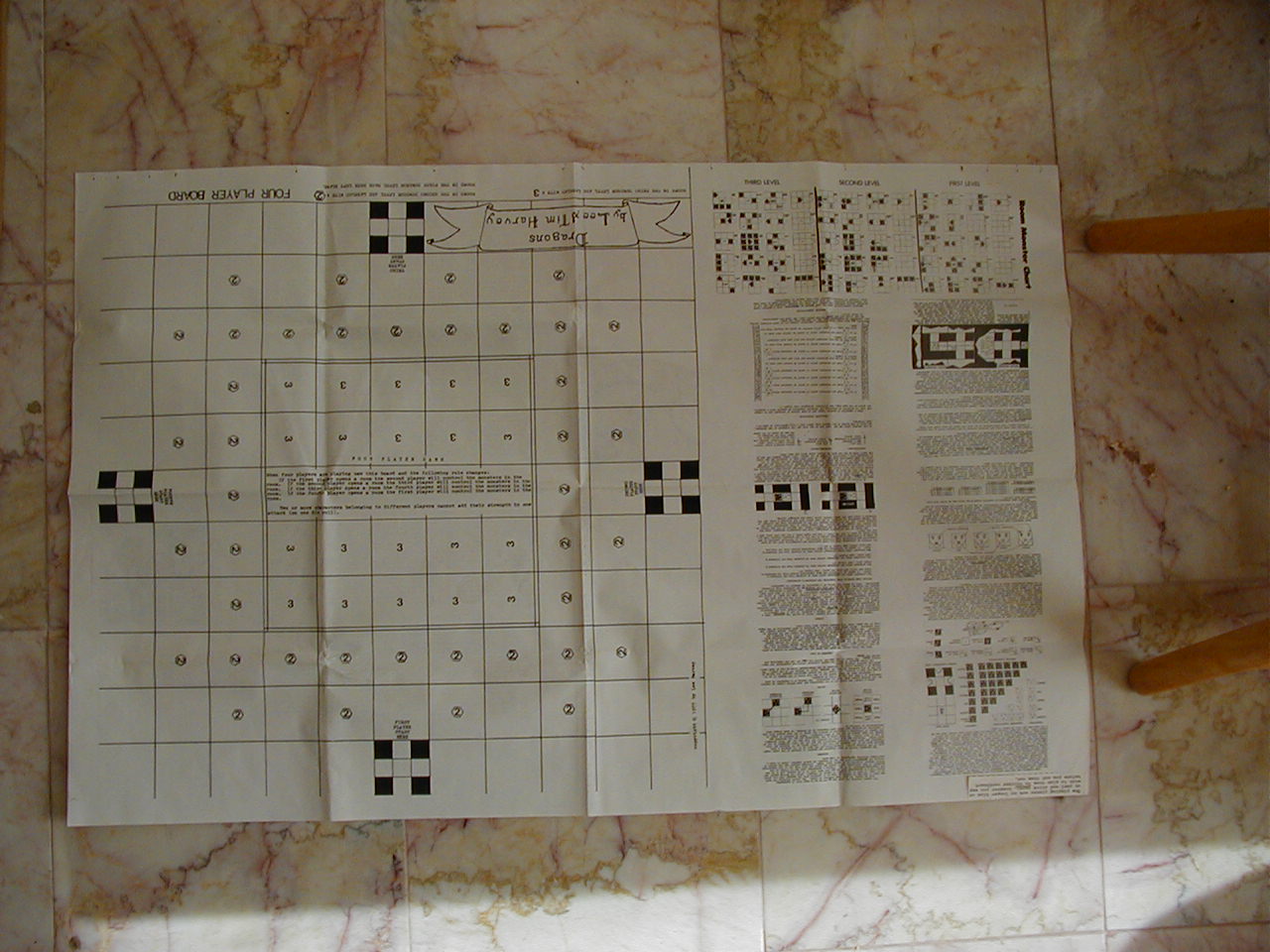 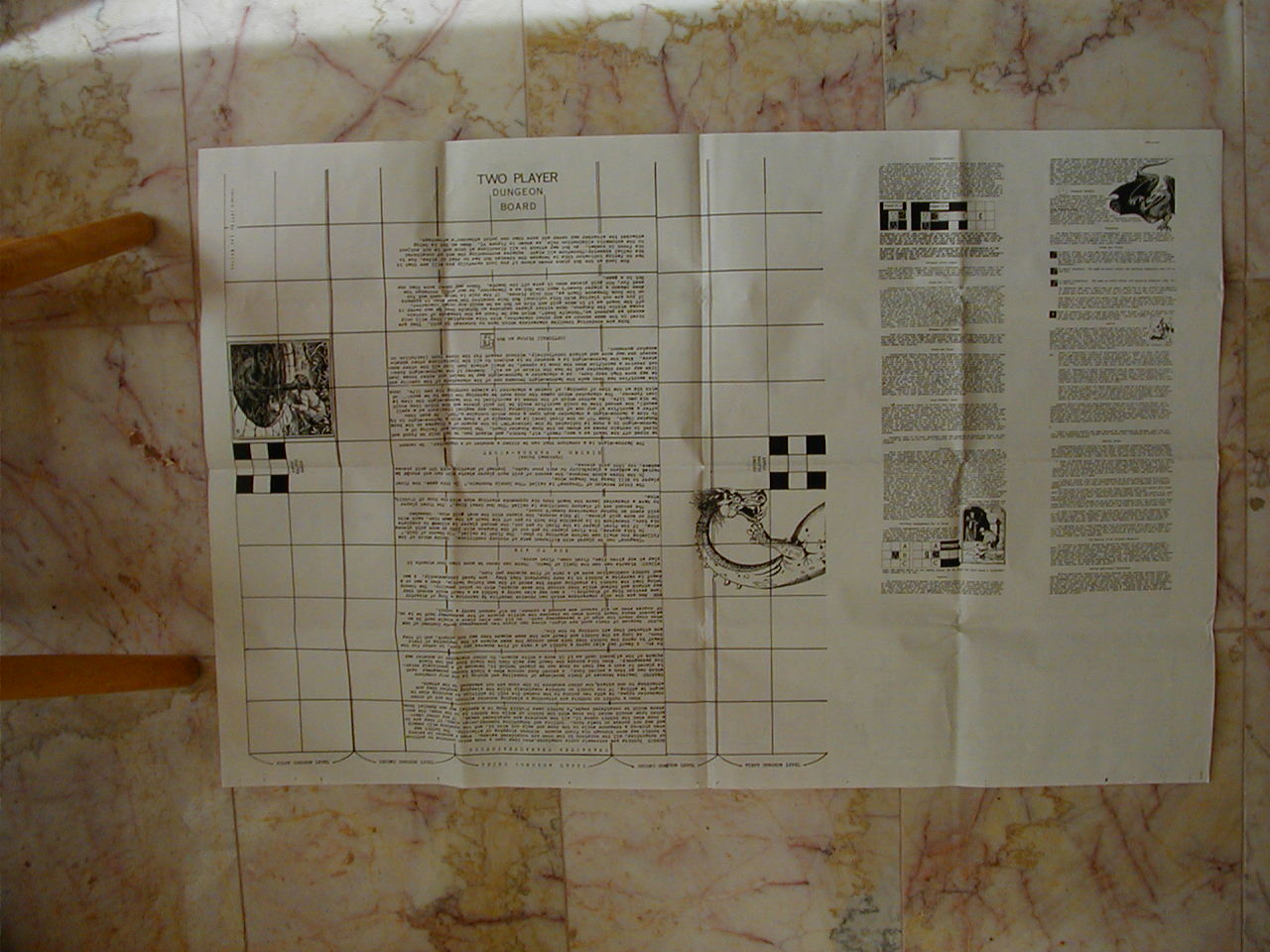